My daughter is in college...
I should be very happy.
She is going to a private Christian college, living on campus, and she will have almost no debt, (if she is smart...)
I am rather apprehensive about it all.
When I attended this college in 1987, I was very disappointed with my education. I could not afford all four years so I got an Associate degree from a local community college (for free) and then transferred in as a Junior. I got a better education at the community college...
Aside from the mediocre scholarship, I just really didn't bond with anyone. I don't hang out with friends from college.
The only person who I just go see for no particular reason is MuddyValley. I pretend it is because I want honey but really it is because his wife is really nice, also I like his dog. I think I've visited him three times in the past five years, other than baling his hay fields.
But, I digress...
I helped "Lulu" move in Friday. We went to all the meetings and speeches. She thought it was funny that I insisted on attending with her as she knows I skipped all that stuff when I went to college.
I asked her if she wanted to end up weird and old like her father... I got a somewhat bitter laugh.
The problem is that she takes after me in so many unfortunate ways.
She got a scholarship from the college I work for that pays her tuition to this University. There is a program called TheTuitionExchange which facilitates this between something like 400 small colleges and Universities.
When you go to work for the college they make it sound like the Tuition Exchange is easy to get. It is not. Lulu applied for tuition at Azusa Pacific University in the shite-hole of LA, George Fox University near where we live, and I signed her up for Pepperdine which has its own surf club.
GFU really wanted her. My wife and I both attended, our pastor attended, one of the dorms is named after my wife's family, and I called frequently and made the tuition exchange lady laugh.
Plus, my daughter wrote one heck of an essay talking about mission work and the call of God for her to be a nurse. 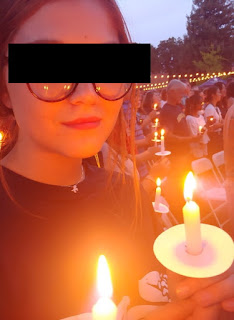 She has decided on pre-med at this point but I don't want to talk about it.
I also have strong opinions about the clever idea of small colleges to have Nursing programs to bring in students. The key (which is where my college is failing) is to then get them into another program when they drop out of nursing. Retention is key.
GFU has studied such things in the years since I was there and it was facing failure. I recognize the tactics as my college has been doing some serious self examination.
Starting with the first hint of attending GFU the student has constant email contact with "advisors." They are given a GFU email address. They have a personal contact, they get invitations and overnight stays.
GFU identified their target market and they work it hard.
I was amazed at the number of pickup trucks with bulk fuel tanks in the back and Oregon and Washington plates are in the parking lots. Working class people are sending their kids to GFU instead of my college. (I did not notice a lot of Idaho plates which I take to mean there are fewer Quakers.)
On move in day there is a team of students who descend on their cars and move everything in in mass, there is a chapel for parents. There is talk of Jesus and faith and prayer. I did notice they left themselves wiggle room. Your Student's faith my not be exactly like you expect. You want them to think on their own but you expect them to end up like you. They must make their faith their own.
Meaning, if your daughter comes home with a butch haircut, nose ring, and a girlfriend, and lectures you on Liberation Theology at Christmas Break, don't yell at us...
Says Cynical Me...
We shall see how this all works out. I suspect working two jobs and not spending time doing my own indoctrination with my daughter has had an impact which I don't like.
In other news...
Farming is frustrating. This is a new thing to read on Lazy Farmer I know but I swear, farmers are such arseholes nowadays.
My high school buddy who is determined to be the hemp expert of Yamhill County rented ground away from another friend of mine for at least double what he was paying. This screws us all as it means another major jump in rent prices. Plus, it was such a dick move. I would have rented him 20 acres in a HEART BEAT for that kind of money. Or he could have subleased the ground from the other guy as he just needs it as a rotation. Then they could have kept the increase in rent on the down-low and it wouldn't have screwed the rest of us.
As for me, I'm so far behind in baling I doubt I will ever catch up.
The guy who buys my straw put me off a week at a time and I didn't pay close enough attention because of my frustrating job and other issues and suddenly it is the end of August and I have three semi-loads of wheat straw which the mice have moved into and ruined the strings and three semi-loads of three-tie annual ryegrass from last year which I couldn't get to because of the wheat straw. Plus, the guy I was paying to load the annual ryegrass stole my customer so I'm not sure what to do with it and the incoming loads of straw from this year.
I baled four truckloads of fescue straw and the fellow buying that straw rejected it because of rain damage. I should never have agreed to bale that straw in the first place as I had a friend who wanted to bale it. I knew I didn't have time to get to it in a timely manner.
And the two-tie baler is busted. The original plunger bearings lasted for five years. The name brand bearings we replaced them with failed in one and a half years. Cheap China Shite has infiltrated every aspect of our infrastructure. Even if the bearing says it is made in USA it most likely has some sort of Chinese crap in it. CCS should be a brand name... 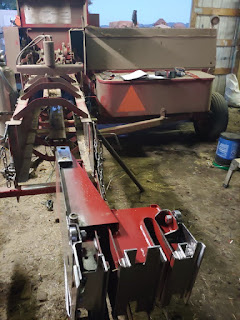 Today I am going to meet my daughter at the Newberg Dairy Queen and drop off a textbook. GFU says you shouldn't see your student for a couple months to get them acclimated but she hasn't lived at home for four months anyway so I don't think it matters.
I was going to take her to Church but she is supposed to go to Chapel by herself.
Ten bucks says she slept in and missed it.