I love working for a bureaucracy. I am seriously happy to give my soul to the greater good and I realize that should I ever violate the greater good by getting caught going against policy I should be fired and my name never spoken again. I would be a little happier if there would be a public denouncement but that is only saved for really entertaining and spectacular crashes where you get your picture circulated via email with the notice you are banned from campus. 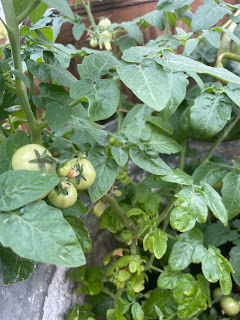 If I grow tomatoes in the greenhouse and eat them while at work, am I stealing from LU if I don't poop before I leave?
COVID regulations somewhat changed the personal dynamics of my job. I used to hang out with the smoker group that met by the grounds department/ paint shop entrance. But after numerous comments on lack of mask wearing out of doors and lingering at break I moved to the other smoker group behind the shops whose supervisor politely brings out work orders if we over stay our break.
I have not been bonding with the new hires like I used to do. There has been a lot of turnover and I don't really see the point. Because of this I did not bond with the new paint department. The head painter seemed like a fine person. Is friendly, has a small business in his spare time, seemed to get things done.
The assistant painter is a quiet guy. Works hard, has a big family, wants to continue working at the college for the benefit of his kid's education. I know his brother and his brother's friends but not him. However, he has a sterling reputation in my neighborhood. Is considered a standup sort of guy.
He stopped to talk to me Thursday as I was cleaning parking lots. He wanted to ask me about my department's policy for loaning tools on the weekend. I don't borrow tools from my department. It is too weird.
Many years ago tools were loaned all the time and someone had to ruin it for all. Apparently, someone was using the truck and backhoe to make extra money on the weekend. He is the one blamed for screwing up the policy but really it was the person of authority over him that failed us. Instead of cutting off access for everyone that person should have been reprimanded and a public lecture given about abusing the policy for personal gain.
But I digress...
Apparently the policy of loaning tools is somewhat unofficial per department supervisor. I think it is really frowned on so I don't do it. Although I was able to borrow a fan for a hemp emergency and was offered a dehumidifier to deal with a mold issue, so I think supervisory people try to be helpful and reasonable.
The Building and Trades department has a somewhat ineffective supervisor who may be trying to crack down on missing DeWalt tools. As per the general attitude of authority at my college the assumption is that people are stealing the tools. As per the general understanding to those who work in the building and trades department, they are just wandering off and leaving those aforementioned tools as they sometimes appear on the roof or random bathrooms.
Here is what irritates me about the system. The head painter was borrowing the paint sprayer and may have been paining houses for people on the weekend. However he had the audacity to report my friend for borrowing a drill for the weekend. My friend got an official reprimand and is on three year probation. No raises for three years and no promotions. My friend did not tell on his coworker, who had told on him.
In the old days we had an employee's association which would have assisted him with this issue. He has several points in his favor.
1. No stated policy on borrowing tools in his department. 2. Everyone else was doing it. 3. His immediate coworker who turned in him was doing the same thing he was doing, only for profit.
I just listened to him and was sympathetic. I suggested he either find a new job, talk to HR, or keep his mouth shut and try to move the the utilities department which has a real supervisor who would listen to his story and make a decision based on his other performance.
This story will get around, I will avoid the head painter as he can't be trusted and frankly, you never know what you may accidentally do that will get you reported. That one time you forget the safety vest or eye protection or too long on break or who knows?
If I were the supervisor I would have called the offender into the office. Given him an unofficial warning. And I would have made sure everyone knew my policy. My supervisor gives us a training sheet and makes us sign it. I fully expect to see something like this coming in the near future.
The one thing I find depressing about my job is just knowing what a great job it could be. But I guess there will always be complaints and I only heard one side of the story.
Posted by buddeshepherd at 9:21 AM