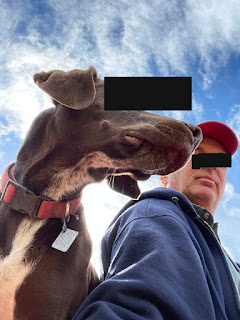 Sunday Morning Sidewalks. We don't have any out in the country. I was checking for comments to approve when I hear a disturbance outside. The new farm dog, whose name is Roscoe, decided to go for a walk with the neighbors.

I have no idea why I think this is funny but I keep thinking,

"Roscoe's on the Street again," which is not really true as he never goes on the street. And really, who still remembers the Boomtown Rats? Perhaps my brain is slightly out of tune.

Roscoe has been hanging out at our house. But only when The Large Orange Cat is inside. Roscoe is the new Farm Dog. He is a good dog.

It appears that he has finally got Goldie the Rat Terrier to play with him. They have found a common bond. There are mice in the pile of pipes across the yard.

But most importantly, Roscoe likes to ride. He is obsessed with riding. He will ride on the forklift, on a tractor, on a four-wheeler and when the Nephews next door are gone Roscoe comes over and sits by my new Gator waiting for it to start. Because he gets to ride in back! It doesn't matter how short the ride. He is ready to go. Also, last week I gave Roscoe three pieces of spicy chicken strips that I didn't want to throw away. That seems to have given us an enhanced bond.

My acquisition of a Gator is top secret. Fortunately I have had the foresight to remove all identifiable features in this photo so I feel pretty safe.

My college used to have a means for disposal of surplus property. But due to the fact that most middle management are either lazy, incompetent, or just tired to the paperwork and are putting in time till retirement, they have abandoned it. Everything just goes in the dumpster.

But there is a way. The unofficial way. This was in effect when the surplus property disposal system was officially in operation. Someone will just give you the offending property with the understanding you make it disappear immediately and don't talk about it. It is kind of funny as it has been officially declared unfair to give surplus or worn out groundskeeping equipment to the individual groundskeepers. This is also true for firewood. Firewood is to be cut up and stacked for students to use. After the pile started to rot we no longer have firewood. It goes in the dumpster. Much to the pain and frustration of those who burn wood.

I have wanted this Gator for a couple years. It was assigned to me when I first started as a Grounder. When it was declared surplus I asked the head of our department for a chance at it if it were to go into the dispersal system. He said he would keep me in mind.

Of course when it came time to junk it, he gave it to someone else not connected to grounds and I ended up being the one called to move it on a Saturday. I was able to trade a vintage Dearborn post hole auger for it. The guy has a Ford 8N so he was excited to find a matching implement.

The disappearance of the Gator has caused much consternation in the grounds department. Other people wanted it. I am sure people will soon point the finger at me and think it is my whiteness and connections to the white "old boy" network that got me the prize. This is in fact true. If I would not have told the correct people that I wanted the Gator the guy whom it was given to would have never talked to me about it and I would have not been able to trade for it.

Small Colleges and Churches and Cooperatives provide such good examples of why the US Gubment does not work...

Now I can find a new job.

This was my goal, to get the Gator...

Now Roscoe has a goal. To Ride in the Gator!!! 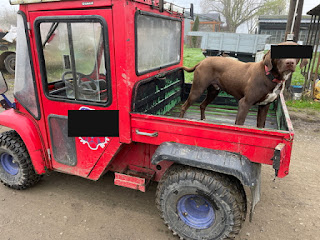 Posted by buddeshepherd at 10:15 AM