I sometimes astonish even myself with my level of negativity.

I just seem to be permanently annoyed and even that annoys me.

I was happy briefly Friday. My college University is building a new Science and Wine Studies building and renovating the Physics building. They had a giveaway of old science equipment. My work study student and I made numerous trips to see what was being declared surplus.

I scored a few key items ahead of time but I resisted the urge to hoard. I wanted three things. First, I wanted the variable a/c transformer useful for reconditioning tube amplifier, old project boxes with crinkle finish, and a 1000ml flask. I did ok. But I missed out on two telegraph keys. Of course my daughter has left me so there is no point in building my own telegraph network and learning morse code...

When the doors opened at 10 a.m. there was a stampede of townsfolk. Many of them were nut case hoarders. I did find at least one meth addict. She headed straight for the glassware. I joined with a former fellow employee and tormented her by asking if she wanted various objects. When she started swearing and using codewords used by feminist idiots with funny colored hair I departed. It was actually quite funny. She had the facial lesions, she was jittery, she was over focusing, she was hoarding. I wish I would have taken a video. Later, she stashed all her stuff under a table and started counting it. Meth is a great social control device. If only it rendered the user permanently sterile. I don't want it to kill people as that is just sad. But, making them dependent on social services and unable to reproduce is great. Social services are the perfect place for earnest young women and ill-tempered liberals who have the need to make everyone's lives better. Keeps them out of building inspection, safety inspections, artifact surveys, aways from the Soil Conservation Service, and so on. Now if only working for the gubment and/or getting a Liberal Arts degree made you sterile... 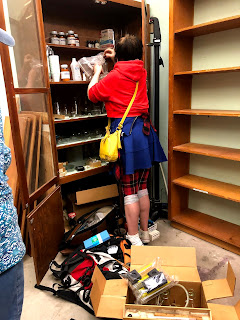 Later that day there was a ground breaking for the new building. My student is in the band and I had been told Grounds staff were to make an appearance. So I attended. I felt a bit out of place. The Mascot was strangely happy to seem me. I am not sure what was up with that. Three fist bumps in one day is a bit much for me. The President's wife gave me a hug! (I suspect that is the one thing that improved my day, she is awesome.)

I retreated to the background and observed. Whereupon I met up with other's of the invisible campus staff and gossiped. It is pretty funny that we are all super conservative and are opposed to almost every BS virtue signaling idiotic liberal pandering the University does. Which is basically every PR campaign.

Much humor was had by all when the tribal dancers and the jackass spokesman for the Confederated Tribes of the Grande' Rhonde' showed up. According to my student when the Cultura rent-a-blessing elder was introduced and welcomed he said something to the effect that it actually was "their" ground which is kind of BS due to the fact that they "ain't from around here," and used to come over from the Grand Rhonde Valley and fight with the local natives. (I may be wrong there, he did claim to be from a local tribe so I guess he did have the right to say welcome to my land)

I just wonder what they were actually saying in their dance or if it was just random. (I also found out I was wrong about the rent-a-blessing! They were there because they were so happy to get a street renamed that they did a blessing dance just for the heck of it!)

I am such a grumpy-ass! This is probably why my daughter is convinced I am a colonialist racist sexist ill-tempered old fart.

Update July 18... That was last week. My wife thought I needed to do something other than look at my computer and so I went fishing. I was a bit on edge and it was not the greatest fishing trip ever. I probably need real medication as times.... Other than arguing with the President of my University over the War of Northern Aggression and the differing cultural significance of the battle flag... And, other things...

The fish I caught is indicative of my expectations vs my reality. 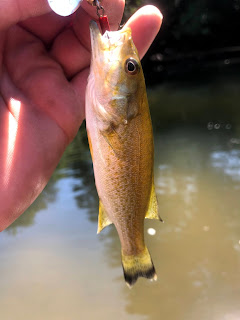 Posted by buddeshepherd at 9:28 AM