The Tyranny of Tenure, how professors can screw a college... Or how Budd E. Shepherd is going to get fired from his Cush job as lawn mower boy

Whist you all know me as a farmer who is out standing in his field, I do have another life. I am Carl the Gardner, groundskeeper at a private college. (also, I just realized where Donald Trump learned to dance)

I am sure there were reasons to take this job but I don't remember them. It is turning me into more of an angry person than I even imagined I could be. I now understand the real reason for the Civil War (War of Northern Aggression) and it had nothing to do with slavery or black people. It was hypocritical Yankees telling Southerners they were evil for buying slaves from Yankee bastards when those same Yankee Bastards actually hated Black people.

I see it every day

When I started at the college the President was a white dude who was mostly into fundraising and funding a wine program. He gave the faculty everything they asked for and facilitated the hiring of more and more liberal dipshit professors because, well, that is what liberal white old dudes do.

Suddenly, the college board discovered the college was going broke. The old president resigned.  And after years of not really recruiting students and becoming more and more irrelevant to the local community, it was decided that changes needed to me made.

So they hired a Black President. A very enthusiastic fellow who had great credentials, and a background as dean of a business school in Virginia.

If liberals were not humorless dipshits they could appreciate the irony of a bunch of guilty white people hiring what they must have thought to be a "magic Negro." This was quite a score for the liberal dipshits as one of the dearly held truisms of dipshit liberals in Oregon is that everyone in Oregon is an utter racist (NPR works this into every story) So they virtue signaled themselves a president and just assumed that since they were forward thinking individuals and on the correct side of history that of course the new president would agree with and cherish every clever idea they imagined.

Those of us who actually do work on campus were skeptical. We were worried we were getting an affirmative action huckster who would turn out to be incompetent and run the school into utter ruin.

It turns our that what I was worried was a BS salesmanesque attitude, was actually true enthusiasm on the part of the incoming President. He loved his job and he loved the students and his enthusiasm and positive attitude was inspiring. But, he made mistakes. He did not realize Oregon liberals are Maoist Bastards (and dipshits) (vs East Coast Democrats who are conservative in economics but sort of social liberals, meaning Whores.) So our President tried to support free thought on campus and had the NERVE to invite the Republican candidate for Governor (A liberal dipshit himself) to speak on campus. The looney left faculty exploded. You would have thought the President was a Trumper!

Then the President actually tried to address the financial crisis at the college. He asked the faculty to essential justify their positions and to work together with the whole college to make it work. The faculty revolted. (Mostly the English Department) Now I personally seriously disagreed with a number of things the President decided to do. I'm not sure we should have become a University, I was very angry when he discontinued our staff employee's association in the name of unity. In fact I emailed him and we got into a serious disagreement. BUT, the freaking president of the college actually deigned to argue with a GOUNDSKEEPER! He responded!!!! (Honestly, He is a good guy.) He worked his way up from poverty. I admire him.

I am getting a bit longwinded and have feed to grind but here comes the crisis.

One of the members of the Board of Trustees sexually harassed a student representative. She reported him to the college who directed her to make a police report. The nutcase professors jumped on this as a means to an end. And I mean that in the Maoist tradition. A Noble Cause Justifies Ignoble means. Even though the Trustee was kicked off the board and is facing felony sex charges (I think its a felony) this was not enough.

The faculty came up with a cunning plan to get rid of the President who made them actually work. They found a Comrade to accuse the President and the Celebrity (black also) who he got to join the Board of Trustees of sexual abuse. And now the President is accused of racism for statements that may have been made during a speech in 2018.

The Professor who accused the President of sexual harassment is White. According to the report I saw, he touched her on the back or shoulder and said he looked forward to hearing her presentation. (I paraphrased a bit.) This was investigated and it was determined that he did touch her but that it was not sexual and did not violate any school standards or meet the legal definition of sexual harassment. Let me go over this again. White female cries sexual assault after a black man touches her shoulder?? Yes, there is racism left in Oregon but it is not us redneck, hillbilly, pickup driving farmer types that are perpetuating it. Tell that to NPR.

There are two professors who are agitating and they are in general pretty toxic employees. Or so I've heard from staff and students. One professor is Indian and the other is a Jewish White Male who is on the Board of Trustees and whose claim to fame is interpreting the Chimney Sweep scene in Mary Poppins as racist. The JWM accused the President of making a big nose joke. Then he made accusations, that because the Chairman of the Board of Trustees noted that the professor was trying to gain power by constantly bringing up claims of sexual abuse, which had been dealt with according to proper procedure, and bringing up this stuff when the school was going broke, was counter productive, the chair was accusing him of being part of a Jewish Conspiracy to take over the world,

Now... I got other stuff to do. I'm going to post some links and you can read it all yourself. All five of my readers

Also, I typed this in the usual hurry so there may be typos so if you are a dipshit liberal and what to pull a typical dipship liberal ploy of attacking my grammar then good for you.

And, much of this comes from sources which were students and staff who saw it but I am not supposed to reveal the information so I might have to delete this whole thing.

Furthermore... Keep in mind the dipshit Indian lady once stood up in a joint faculty staff meeting and noted that the faculty was the "Power of a Small College" (former slogan of my college). This was during a meeting when the retirement of the staff was being disproportionatly cut in regards to faculty) It was amazing. One after another, hispanic staff members got up and walked out.

Read these twitter links and understand. These people flat made this shite up! There will be NO repercussions for them. And this is how liberalism works...

This is the first car I drove by myself... 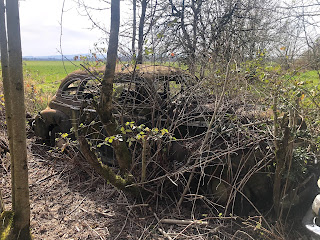 Also, I really do need to start proofreading but I got to make 4,000lbs of pig feed. Infused with hemp! This makes the feeding program much more efficient. The pigs can then subsist on out of date Nacho Cheese Dorritos and live in a basement. Although Chester Whites tend to join college Fraternities and listen to a lot of Peter Tosh and rap music with no sense of irony.

Posted by buddeshepherd at 11:13 AM