Last Sunday my daughter and I went to Salem and I purchased several record albums. I am supposed to be working on my end of year book keeping but since First Federal redid their website I can no longer retrieve past statements. I will have to make a trip to the bank Monday.
I discovered my Scott tube amp was not as damaged as I thought, although the Rek-O-Kut turntable must be rewired.
I have been listening to the Allman Brothers, "Beginnings," which I bought because someone commented on one of the songs on this blog and then I forgot which song and who commented.
I connected the tape out on the Harman Kardon 330c to the Scott so that I could get four speakers. The HK is connected to my refoamed Baby Advents and the Scott is hooked to Dynaco A25's.
I was expecting a nice warm bluesy sound.
It kind of sounded dead. No much high range.
So I put on my own Tom Petty, "Southern Accents" album. It sounded very nice. Plenty of high range, turned down the treble a bit. Nice crisp midrange, Tom's voice sounded a little less fuzzy around the edges.
And this is the problem with vinyl albums. Every time you play them you loose a little fidelity. They wear out. The record may look pristine but you can't see in the grooves.
All things must perish....
But, I digress...
My plan was to walk around downtown, try a coffee shop, look at odd little shops in the historic Reed Opera House Mall, and I would work in a couple record stores, which she does not like, and perhaps a couple bookstores, which she does like.
But then I realized I had to finish up my bookwork.
The local bank has decided to make their website more exciting with graphics and fancy stuff and a user agreement that of course puts most of the responsibility for screw-ups on the customer. So, at the critical point I discovered I can't access my archived e-statements and I came to a dead end.
So we went to Salem.
The plan was to see "Unbroken" at 4:30 and get something to eat.
I found a new record store on Yelp. It had pretty funny reviews. The owner has been a little harsh with a few customers. When people show up with the standard old person's scratchy record collection of Mitch Miller, Marty Robbins, Tijuana Brass, the owner sometimes insults them. One lady said he chased her from the shop and kept the good records.
I thought this would be good for some amusement.
The daughter was not impressed.
We found the store which was next to a Pizza by the Slice place and so we decided to regroup. After a large slice of pizza we decided to try the store.
The store was interesting. There was a huge collection of CD's which I didn't care about and didn't look at. I was impressed by his vinyl collection. There was a section of alphabetized bins, but there were also random boxes of records under the CD racks, under the record bins, leaned up against the counter, piled on the floor, in no apparent order.
The owner welcomed us to his store and assured us that as first time customers we would get quite a good deal. He asked me what I was looking for.
I was looking for Albert Collins. The owner directed me to a cardboard box under the record bins. He said he had but a few blues albums but he personally enjoyed blues music. 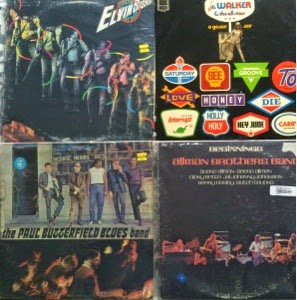 I found three albums, Jr. Walker and the Allstars, "A gasssss", The Allman Brother's, "Beginnings," and Elvin Bishop, "Struttin My Stuff."
They were sealed with what I think was a "seal a meal," and so I couldn't check the condition of the vinyl and they were marked with random prices but I really wanted "Beginnings," as is it the first two Allman Brothers albums in one double album.
We had to wait quite a while as the owner discussed the merits of collecting CD's and his expectation that Cassettes will be the collectors choice of the future. Cause I'm pretty sure Iron Oxide bonds to plastic forever and half the point of vinyl collecting is our dislike of digital.
I said nothing but patiently waited.
Eventually it was my turn.
The owner spent quite a bit of time scanning the records into his computer and calculating prices, there was great ceremony which cutting open the shrink wrap and presenting the records for inspection. They were in fine condition. Then he upset everything by pointing out The Paul Butterfield Blues Band record, which I picked up.
Everything had to be recalculated and a special deal had to be made to a first time customer. I ended up paying a little above my max price of $3 per album. 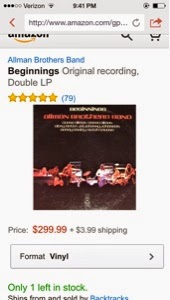 Later that evening I looked up the albums on Amazon. I was excited to find the Allman Brothers listed on Amazon for $299. I thought I was rich until I checked ebay.
I could buy the album for $13.99 with free shipping.
Oh well.
They were all in good condition.

Posted by buddeshepherd at 7:47 AM