"Get off my lawn," Clint Eastwood threatened to Shoot Michael Moore, (YES!) and I actually do work...


I love the Daily Mail. I it so trashy and their spelling and punctionatiol is worse than mine!
Michael Moore is seeking more publicity by keeping the American Sniper criticism going by giving out periodic quotes.
I have read a lot of war books including the book by Carlos Hathcock. I think I could not be a sniper. I think it might mess you up just a little bit.
I am not all that comfortable with the American Sniper movie. There is some controversy about it, you can look that up.
I just think it is pretty funny that Michael Moore is such a whiner.
(Quote is link to article and please note the quote is out of context with Moore's Sniper quote. The issue with Moore and Eastwood that this quote is from is several years old. Eastwood did not recently threaten to shoot Moore.)

"Eastwood Said: 'Michael Moore and I actually have a lot in common.
'We both appreciate living in a country where there's free expression. But, Michael, if you ever show up at my front door with a camera, I'll kill you.'
Read more: http://www.dailymail.co.uk/news/article-2933209/Clint-Eastwood-threatened-kill-Michael-Moore-Documentary-maker-reveals-American-Sniper-director-claimed-shoot-appeared-door-camera.html#ixzz3QJwNBbLH  Follow us: @MailOnline on Twitter | DailyMail on Facebook"

I had to laugh at the article. I could imagine Moore with a video camera outside Eastwood's house and Eastwood coming out with a Colt 1911 and telling him to get off his lawn.

In other news....
I actually planted 14 acres of oats yesterday. 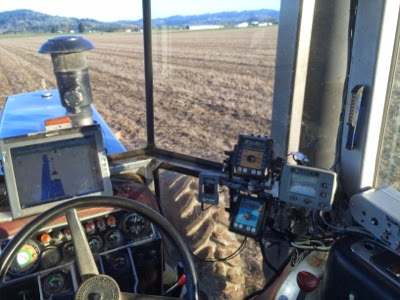 This was not as successful as I would have hoped. The ground was a little on the wet side and when I would actually open up the throttle to get some work done the solenoid that turns on power to the cab would fail because White decided to mount it three inches from the exhaust manifold so every three years it melts.
And, despite all my wiring efforts, the automatic run/hold doesn't work. After some effort I figured out that the control panel switch had failed on one side, the automatic side. It was ok, I was planting in circles.
Posted by buddeshepherd at 8:02 AM