I tell my daughter she is my favorite. She replies that is because she is my only daughter.
She helped me chop silage last week as the lovely and gracious Mrs. Budd E. Shepherd was still teaching. The daughter (who we refer to as "Lulu" in this blog) was finished with school several days earlier.
We generally had a good time. We sang silly songs and discussed if the surrealistic life of the Lazy Farmer on Happy Daze Farms led to the dadistic interpretation of farm life as expressed in the blog of the same name. It was her opinion that applying a term such as dadistic (which I didn't even know how to spell) to this blog was a tad pretentious and a more apt description would be, "undisciplined, and grammatically challenged ramblings," and if big words were to be used in the description, perhaps "didactic," although "cheap sentimental and pedestrian moralizing," would probably be more accurate.
Actually, we did sing silly songs and she spent a little effort trying to get the truck driver to take his teeth out, which we find quite funny.
It was nice to have company.
Although, I have a hard time not messing with her head.
In the photo below we have had a major hydraulic failure. A hose blew out and we lost about five gallons of hydraulic fluid. She wanted to help so I let her pump the fluid into the tractor.
I bet her she couldn't pump five gallons of oil into the tractor in less than a minute. Usually she says, "show me the money" when I make bets with her but this time I told her that her boy cousins were wimps and couldn't do it. So I set the stopwatch on my phone and away she went. I gave her lots of encouragement as I leaned against the tractor tire. She actually did it in a minute and a half but I lied and said it was 58 seconds. Now I owe her an ice cream.
She is the best daughter ever! 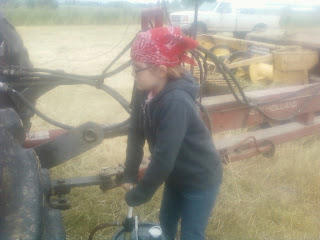 Posted by buddeshepherd at 1:58 PM