Finished my field in the rain

I woke up to the sound of rain this morning... Not a lot, just enough. I didn't sleep all that well anyway. Still a bit tense.
I drove out to the field to check it out and it didn't look that bad. There was enough sod to keep the mud from sticking too bad and I have really good scrapers on the drill so I gave it a try. I finished up around three this afternoon. Ended up with 70 acres on the calc-an-acre. Seed rate really changed with the rain. Had to go up a gear in the drill transmission. Tried to keep the monitor at a mininum of 1.1 million seeds and a max of 1.4 million. It came out pretty close in the end.
Have been amazed at the huge house setting in the middle of 200 acres of rolling hills. Has a castle turrent over the garage.
I asked the farmer I'm working for about it. He said the fellow recently died. He said he talked to the man when he was buying the place a couple years ago, said the man was his friend and that he just died. Pretty nice house. Such is life. The thin line between success and failure.
Farmer told me his father nearly owned a huge ranch in Argentina. His father was the ranch foreman. The ranch was owned by a German fellow. When the guy died they had an auction and sold horses for three days straight. It looked like the foreman was going to get the place but a woman turned up who had a son who was supposedly sired by the ranch owner. She swore on the Bible that this was true and the son got it all. So it goes...
Here are some photos: 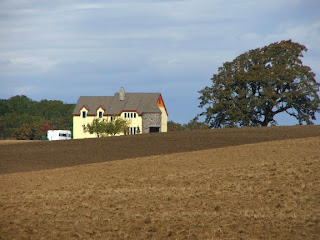 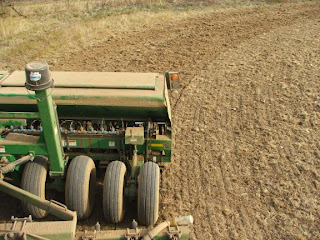 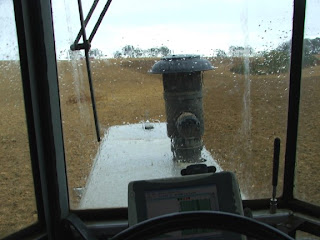 Planting in the rain today. 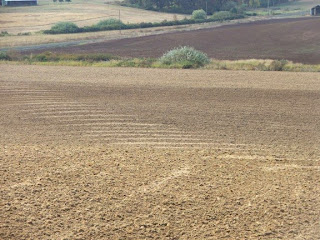 Finishing the field, just the corners left.
Posted by buddeshepherd at 8:20 PM